Home  »  News  »  No Fans? No Problem, as Hernandez Leads Dodgers Over Rival Giants, 8-1 on Opening Night

No Fans? No Problem, as Hernandez Leads Dodgers Over Rival Giants, 8-1 on Opening Night 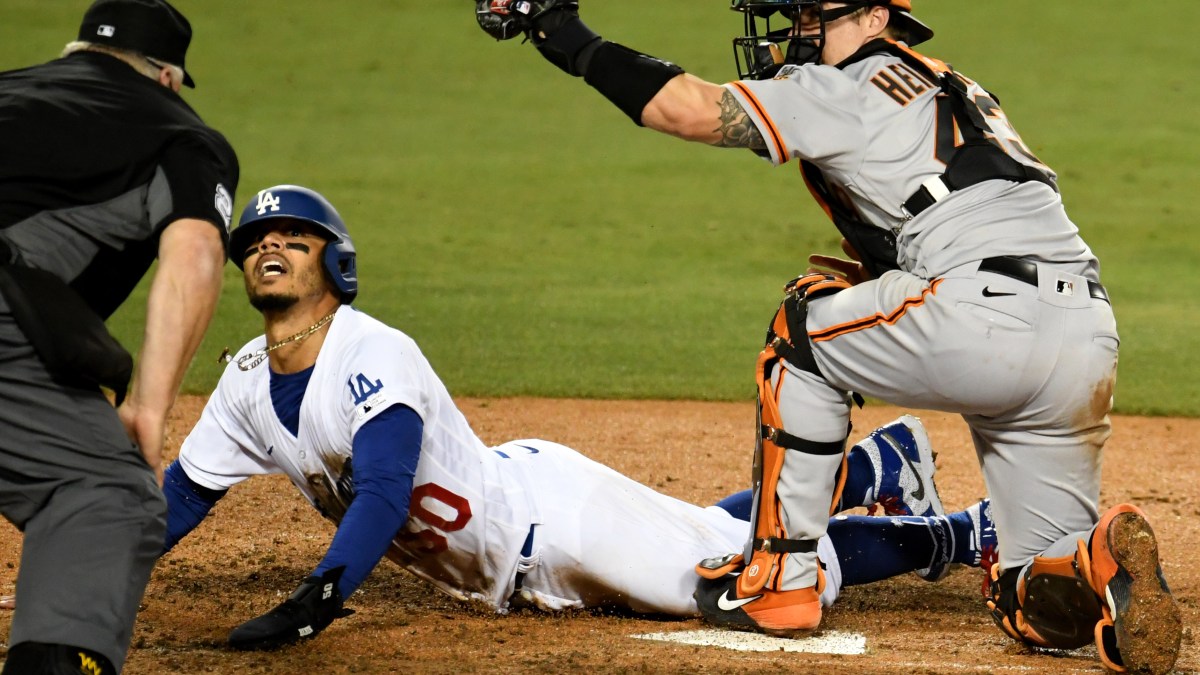 Entering the 2020 season in spring, the Dodgers starting job
at second base seemingly belonged to rookie Gavin Lux. Lux was called up in
September of 2019 and took over the starting job from Hernandez. Lux played in
23 games and started four of the team’s five playoff games.

However, because of the COVID-19 pandemic, baseball was
suspended for nearly four months. Due to undisclosed personal reasons, Lux
arrived late to the Dodgers three-week summer camp and once he did return he
struggled at the plate and in the field. The Dodgers optioned Lux to their
minor league camp at USC on Tuesday, presenting a golden opportunity for
Hernandez to be the Dodgers every day second baseman.

Hernandez made the most of that opportunity in the season opener. He recorded the Dodgers first hit of the 2020 season with a single to right field in the second inning, knocked in the team’s first run of the season with a single to left field in the fourth inning, broke the game open with a two-run single to right in the bottom of the seventh, and hit the team’s first home run of the year with a two-run shot in the bottom of the eighth.

“I’ve put the work in and am trying to stay consistent on not trying to do too much,” said Hernandez about his approach at the plate. “Tonight I drove the baseball with a lot of authority. Hopefully, I can have a few more of these days.”

Three-time Cy Young Award winner Clayton Kershaw was originally scheduled to make his ninth career Opening Day start, but the left-hander was scratched just hours before the game because of back tightness. 22-year-old rookie Dustin May made the start instead and pitched well on such short notice.

“I was anxious,” admitted May about pitching on Opening Day. “Not being able to be in a game scenario since last October. The anxiousness of wanting to get started. Once the first pitch was thrown, I was all good and ready to get going.”

May allowed one run on seven hits with no walks and four strikeouts in 4.1 innings of work, but conceded he’d been on a rollercoaster ride of emotions the last few days.

May said he was told on Tuesday that he was going to be optioned to the team’s minor league camp at USC. However, on Wednesday, after Kershaw suffered a back injury in the weight room, he was told by manager Dave Roberts that there was a pretty good chance he would make the start in Kershaw’s place on Opening Day.

“I went on yesterday night as if I was getting the ball and I got it,” said a smiling May.

“He’s unflappable,” said Roberts of May’s composure on the mound. “He pitched big for us in the playoffs [last season]. To kind of get the ambush notice the day before Opening Day and then pitch well was fun to watch.”

“He wasn’t intimidated by the amount of cardboards we had in the stands,” joked Hernandez.

2014 World Series MVP Madison Bumgarner is no longer wearing
a Giants uniform, so Johnny Cueto is the new ace of the pitching staff for San Francisco.
Cueto was excellent through four innings, allowing just one run on five hits
with one walk and three strikeouts.

Unfortunately for San Francisco, it was the bullpen that let
the Giants down. Submarine thrower Tyler Rogers was tagged for four runs on
three hits in a five-run bottom of the seventh for the Boys in Blue.

The newest Dodger, Mookie Betts, who signed a 12-year, $365 million extension with the team on Wednesday, went 1-for-5 with a single and a run scored in his Dodgers debut.

“It’s a new chapter in life and tonight was the beginning,” said Betts when asked why he asked for the ball after his first hit as a Dodger. “I’m looking for a lot more of those.”

Another new member of the Dodgers, right-hander reliever Brusdar Graterol pitched a scoreless ninth in his debut.

Players Kneel Before and During Anthem

Every player on both teams kneeled while holding a ribbon to show unity for social injustice and Black Lives Matter. During the singing of the national anthem, several players on the Giants and Betts kneeled. As Betts kneeled, 2019 NL MVP Cody Bellinger and first baseman Max Muncy placed their hands on his shoulders.

“Unity. We’re all on the same team. We’re all here for change,” said Betts. “I tip my cap to them [Giants] for the support. We have a great group of guys and we all support each other and it doesn’t surprise me that Belly [Bellinger] and Muncy were there with me.”

Betts stated in an interview in 2016 that he would not kneel for the national anthem out of respect for his father who served in the military. However, he admitted after the game that his thoughts and feelings had changed since then and said he was not as educated on the subject then as he is now.

“I think I wasn’t educated. That’s my fault. I need to be educated on the situation,” conceded Betts. “I know my dad served, and I’ll never disrespect the flag, but kneeling has nothing to do with the troops that served, it’s about change and injustice.”